Czechoslovakia was founded in the aftermath of World War I as one of the successor states of the Austro-Hungarian Empire. The Central European country then existed (with a brief interlude during World War II) from October 28, 1918 to December 31, 1992, before officially splitting on January 1, 1993 to form the independent Czech and Slovak Republics. In 2018, both countries will be celebrating 100 years of existence and commemorating all that they have shared with the world together. 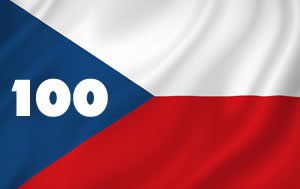 Congratulations! All the best for the next 100 years!